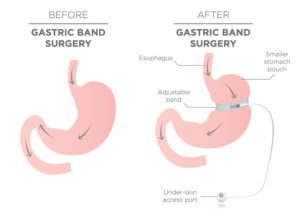 The Lap Band is an inflatable silicon device (band) placed around the top portion of the stomach. With the use of restriction (the Band) that could control how much a person can eat helping the patient eat less and feel full quicker. Causing a calorie deficit and helping a patient lose weight.

Over the years, patients were successful with weight loss. Patients had to be very mindful while eating, chewing, and stopping when they started to feel full.

The rarest complication is “Erosion” of the band into the stomach. This could occur when the band was too tight for too long. The band would begin to grow into and through the stomach wall, much like a wire too tight around the base of a growing tree.

After these complications occur the band will no longer function as desired, and often need to be removed with surgery or a revision procedure to a different procedure. If you have a Lap Band and it hasn’t worked for you, don’t consider that a failure, consider a different procedure, a consultation with a surgeon at Eviva would help determine the best route for you. We have seen great success with these patients and walk them methodically and carefully through the options.

For those who have found success with a Gastric Bands (although we no longer place Lap Bands), we continue to take care for patients with Lap Bands at Eviva. This includes imaging, adjustments and medical support as needed. Patients from far and wide with Bands seek us out. Currently, about 20% of Band patients do well long-term regarding health and weight loss.

We understand that every patient’s journey is different from the other, and we pride ourselves in providing multiple financing options to achieve your weight loss goals.
Financial Info

"If you are considering weight loss surgery, do it now. It will change your life! Do not wait!"